Neil Munro has recently reached the 100 club, despite two knee replacements. He tells us how he first got involved, the adventures it has taken him on, and why it has been so special sharing it with his family.

I heard about parkrun from my neighbour Claude Pearce who was eighty years old in 2017. He was a regular runner at Modderfontein Reserve, so I joined him on 24-1-2017 as a novice. Even though I had two full knee replacements in 2010 I thought let’s give it a go! Needless to say, I was immediately hooked.

The following week armed with a barcode we went back to Modderfontein and we walked the course side by side in a time of 54.50 yes this was about to change my life.

I did about twenty runs at Modderfontein and had my daughter her hubby and my two adult grandchildren hooked as well, now it was time to do other venues. She lives in Boksburg so I started to alternate between Modderfontein and Boksburg and in August 2018 we decided to run at the inaugural in Edenvale.

At the start were a large number of runners wearing orange caps, being curious we found out about this tourist thing which gets you an orange cap if you complete 20 different events.

My daughter researched the web and found out about the challenges attached to parkruns. Little did I know that a lot of travelling and different venues were in the pipeline. Saturday became parkrunday and we hardly missed a run.

I completed my 100th parkrun on Saturday 31 August 2019. There have been several memorable moments along the way. 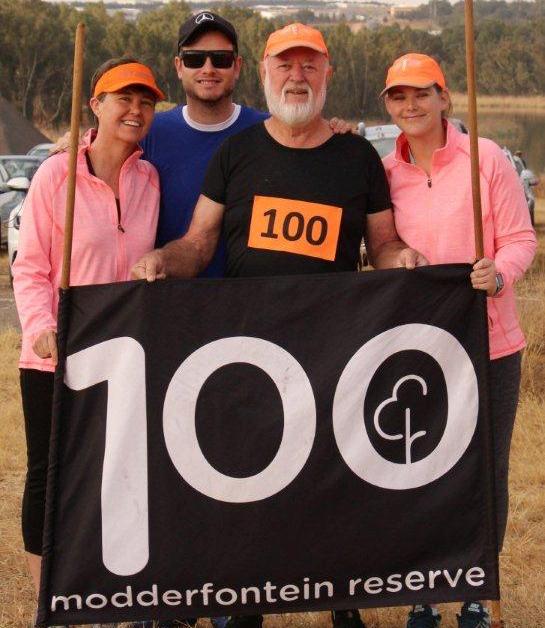 There have been giraffes blocking the course at Umfolozi, flushing a steenbok at Drumblade that nearly gave me a heart attack, walking side by side with a springbok at Haartbeespoort, running in pouring rain on New Years Day at Ruimsig.

As well as that, there was completing two Tutu runs, driving 800km to Upington only to find the run had been cancelled, running in freezing weather at Clarens, and meeting Bruce Fordyce at the inaugural Umfolozi run. My orange cap well deserved.

I must thank my daughter Gillian Ripley for all her research and drawing up the weekly itinerary. She is such a whizz on the computer! Unfortunately they family is emigrating to the UK so for me, it will be back “home” to Modderfontein.

parkrun volunteers helping out in lockdown

Despite the ongoing lockdown preventing parkruns from taking place, parkrun volunteers continue to find ways to help their communities in this difficult time. The core team at Bridgetown parkrun tell us more about what they have been doing:   The Bridgetown Core Team has really been missing all our parkrunners during this lockdown period.  …