Making this a beautiful world

What does it mean to thrive? How does it feel when you are thriving? I felt this on Saturday 9 November. I set off early to volunteer at the Delta parkrun.

It was not a very onerous task. I was one of the early morning car marshals channelling cars into tight squeezes in the car park. But it felt good to contribute and to give back a little. I was one of 55 other volunteers all cheerfully getting on with one task or another, sharing in the camaraderie of doing something together on a sunny day.

Then I walked/ran the 5km course along with 1,396 other people. And I just loved it. Delta itself is beautiful. Sandton frames the skyline on one side and Johannesburg city the other, and in the middle of suburbia, you find 104 hectares of natural grassland and trees with the Braamfontein Spruit running along the one border.

The route takes you up and down little hills and one rather steep one we ambitiously called “Polly Shortts”. The reward for puffing your way to the top is the sight of a large tranquil pond lapped by fronds and gnarly trees.

You run over a couple of wooden bridges crisscrossing over little streams that the dogs love to run into and get thoroughly muddy. As you go through a green field there’s a kid’s playground shaded by a small wood. It’s quite idyllic. 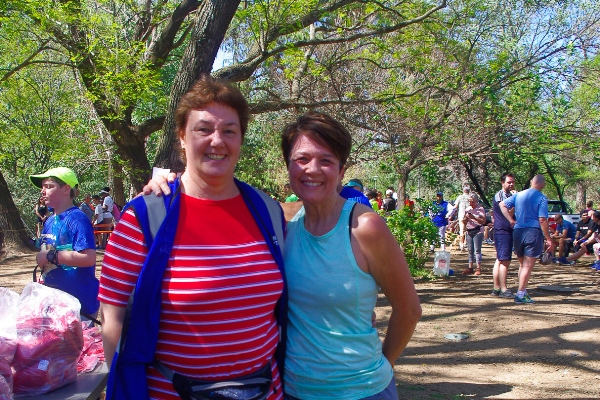 But it was also stretching and pushing my body that felt so invigorating. I have been doing Delta parkrun and a couple of others round Joburg for a while, and slowly my fitness has increased to the point that I now half run and half walk.

Something my high school teachers would never believe because I notoriously hated running and declared it loudly within hearing distance of all sports coaches.

What makes me push myself that little bit more is that the parkrun is timed. This just piques that slightly competitive part of me that wants to beat my last time. The beauty of the parkrun is it’s not a race. You are not competing against anyone else, just trying to achieve your own personal best.

What also makes the parkrun an event and not just your own jaunt around the track is the people. parkrun is for everyone. Today I saw a young woman with earrings dotted up her ears, holding the arm of a small, hunched, elderly lady who was wearing a bright orange T-shirt with the words “Putting active back in activism. Orange Run” on the back.

A middle-aged Muslim woman in her niqab elegantly stepped over a wooden railing as we started. There were several dads running alongside their five or six-year-olds cajoling them along. Friends and couples walked side by side chatting away. Dogs on leads were pulling their owners. And in the front were the energetic pace-setters hair flying and slim, fit bodies pumping.

It’s a conglomeration of cultures, ages, and abilities. It’s a community of people who are sharing a space and an activity in perfect acceptance of each other and enjoyment of the moment. For this 45 minutes or so there is combined participation in something together that makes us feel we’re okay with ourselves and the people and world around us.

As you can tell I am a fan of parkruns. And today was a particularly special occasion. It marked the eighth anniversary of the start of parkrun in South Africa which happened to be – wait for it – at Delta!

Bruce Fordyce, best known for having won the South African Comrades Marathon a record nine times, founded parkrun in South Africa and was there to officiate the start of the run/walk. To mark the occasion there was music playing, there was cake and an all-around celebratory vibe.

So I did some “googling” and discovered the amazing story of the start and ongoing phenomena that is parkrun. Paul Sinton-Hewitt, a marathon runner who seconded Bruce Fordyce in his Comrades Marathons, born in Zimbabwe and schooled in South Africa was living in England, suffering from depression after an injury.

In 2004, to get himself out, and to be with friends, he invited a group to come along to Bushy Park to run a timed, 5km course. Thirteen people ran and five people volunteered. There are now more than 6.3 million registered parkrunners and Paul received a CBE in 2014 for his services to grassroots sports.

I find this so inspiring. One person, at their darkest point, chose to do something. It was something simple – get outside, do some exercise, in the company of friends. It was not to be a race, so no pressure and therefore utterly inclusive. But the incentive was that it would be timed so you could measure your progress.

It was also always and forever free. Registration is once online and you can walk, jog, run or volunteer at any parkrun, anywhere. Therefore the barriers to entry are almost non-existent making it accessible to just about anyone.

Eliud Kipchoge, the iconic runner who recently ran a marathon in under two hours said after his historic run, “I believe in the positivity of sport. I encourage all human beings to get outside and run. Together when we run we can make this a beautiful world.”

So this is what it takes to thrive in this crazy world of ours – take a step outside, walk around the block, chat to a friend, share in a community activity, volunteer, challenge yourself to keep improving on your personal best. And if you want to do all of these in one go, participate in a parkrun.