When was Laudium parkrun set up? The first parkrun in Laudium took place on 18 October 2014 at the Laudium Stadium, and was the second parkrun to be  launched in the City of Tshwane.

How did Laudium parkrun come about? 5 years ago, Haseena Azmuth (Event Director) representing Women Without Limits with the support of Delfos Football Club grabbed the opportunity of creating a safe running environment within the community. Haseena has completed several marathons and ultras, as well as a number of multi-stage trail races. Her passion was to get the community involved in living an active lifestyle and to generate an interest in the sport of running amongst the youth. This came at a time of increased awareness on the importance of exercise in tackling obesity, sedentary lifestyles and even mental ill health.

What have been the highlights of Laudium parkrun so far? The Laudium parkrun route is known as one of the more challenging routes amongst the neighbouring Parkruns in the Pretoria area. A memorable moment for us was when, Bruce Fordyce labelled our route “a tough hilly run” following our opening in 2014.

Every anniversary, runners look forward to running the usual parkrun route in reverse. Running the hilly stretch of the route at the beginning of both laps always brings much enjoyment to our regulars. The warmth and enthusiasm expressed by volunteers every Saturday is what makes our event memorable to many first timers and visitors to Laudium.

Seeing the diverse groups of people of all abilities sharing a common space and enjoying their Saturday morning at Laudium, makes every week special and memorable to us. 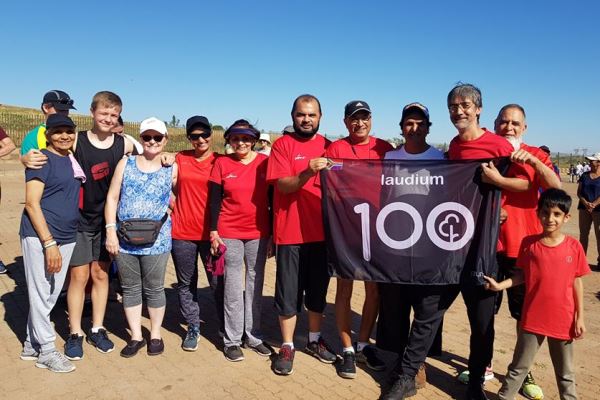 Who helps to make Laudium parkrun a success? parkrun has shown how amazing human beings can be when they strive to help each other as displayed by the selfless spirit of the volunteers. Haseena Azmuth co-ordinates and plans the volunteer roster weekly via WhatsApp to ensure that there are sufficient people volunteering each week.

Currently we are fortunate to have a solid and dedicated team of volunteers who set-up and monitor the route each week and are there without fail to assist and set up the run.

What makes Laudium parkrun unique? It has helped to grow the community spirit of the area by bringing together diverse people and has shown how sport can be used as a tool for nation-building and community engagement.

We also consider it a very lively and friendly parkrun, thanks to the marshals at the finish who cheer on participants as they approach the finish point.

What is the course like? The route is a hilly trail which was initially under consideration for the Tshwane Cross Country competitions. It’s a double lap which means doing the tough hill twice. Our route is not extremely difficult but not too easy.

There are some nice flat grass sections, some short downhills with a slow hill towards the finish. The fastest time on this route is 16:03 which is the male record, while the female record time is 20:14.

What are the typical parkrunners who come like? Ages range from 6 to 80 years. There are families, couples, kids, older people; even people running with dogs on leads. We’ve even had triathletes, cross country athletes, and hikers who have conquered Mt. Kilimanjaro come to Laudium parkrun.

What achievements have Laudium parkrunners had? One of our regulars at Laudium, Mohamed Essa Suliman, started parkrun in 2014. He attended Laudium parkrun weekly achieving his 50th in a record time. When he started parkrun, running even 1km was too much for him. His first race event in 2015 was the 6.7km Mandela Relay.

He attempted his first 10km race at the beginning of 2016 and the rest is history. In that same year he ran his first 21km at Soweto. He ran his first marathon in 2018 and in the same year completed the 56km Two Oceans Ultra Marathon.

In 2019 he went on to attempt his first Comrades marathon after his second Two Oceans Ultra. He is still a regular at Laudium parkrun and always fondly remembers where it all started.

What are the facilities like? There is ample parking space inside and outside the stadium. The start is in the parking lot while the finish is under the shade cover of the grandstand. Toilet facilities are available at the stadium.

All this is within comfortable walking distance of the parking and the starting point. Runners can even warm-up and cool down on the football pitch.

What is the one thing a first timer to Laudium parkrun should know? It’s always our pleasure to host first-timers and visitors. Remember, no printed barcode, no result! First-timers will be called out so that everyone can welcome them to Laudium.

They should also expect to get a roaring applause as they approach the finish. Not forgetting, we love to “brag” about our visitors on Facebook, so be prepared for a lot of photos.

Franschhoek parkrun done, it’s beautiful! Secunda is our hometown. This was parkrun number 123 for me and I’ve done 29 different parkruns.   Jannie Botha       I had a lovely morning with my friends and dogs at Durban Point parkrun.   Karen Furk     I was talking to several people at parkrun…

Komani parkrun in the Eastern Cape started on 21 October 2017 at the Queenstown Golf Club.   Over 2,200 parkrunners have since completed the course. The core team tell us more…   How did Komani parkrun come about? The need for an event, where the community could enjoy and be involved, made Theo Ferreira apply for…