My first time at Thousand Hills parkrun. It was extremely beautiful, but I didn’t know it was one of SA’s toughest!

I wasn’t sure I could make it, but the volunteers were amazing & motivated me all the way.

Thanks to you I feel chuffed!

We had no idea what we let ourselves in for when making the decision to rather treat the parkrunners to iced fruit juice lollies instead of cake when my “hubby” Clem Eccles achieved his 250th milestone on 28th December.

The first inkling was definitely the grunts I heard as he came down the stairs with an enormous white fertiliser bag which he dragged behind him. To my consternation it was only the first of two bags – the lollies were about thrice the size I anticipated! As I looked at the bags on the dining room floor, I eventually got my voice back and asked “How are we going to freeze them all”? That is when my organising skills were tested to the limit. As you can imagine, most people stock-up before the festive season with friends and family visiting from far and wide because Mossel Bay is a popular holiday destination – resulting in very limited available space in their freezers.

I realised soon that I will have to broaden my mission and also include non-parkrunning neighbours etc. Another challenge was that a few of the lollies perished from the drag down the stairs and I had to wash each of the 500 so that they wouldn’t stick together during the freezing process. Eventually we found temporary homes for most of the lollies. Some of the them were brought to parkrun by their care takers but others we had to wake up from 05.30 that morning to collect the lollies. 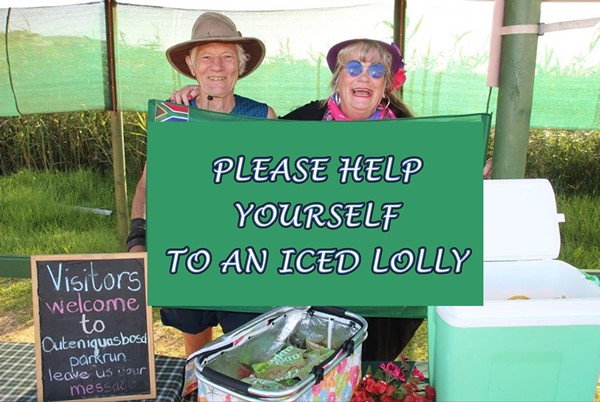 When we were eventually on our way to parkrun I sat with a big cooler box on my lap because the car was packed to its rafters with all the other things we normally take to parkrun – including 80 litres of potable water for the higher number of participants over the festive season. At some stage I think my “Liefie” was a tad irritated because he said “I wish you want to realise this car is not a lorry”. At least it seemed as if the neighbourhood-effort iced lollies was a hit amongst everybody on the very hot summer day.

Thank goodness the place we bought the lollies from did not have the full amount in stock that I originally wanted. 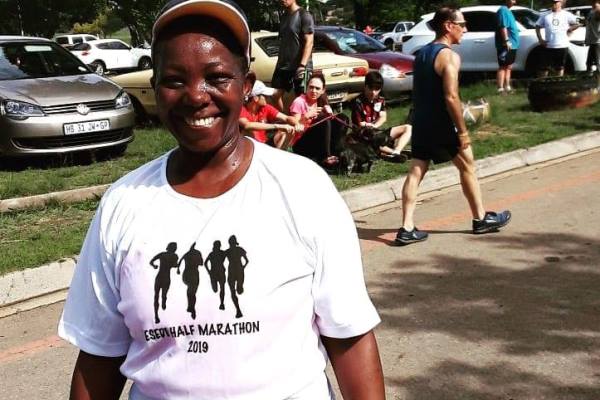 I started 2020 with a bang at Boksburg parkrun!