From Mount Everest to the home of parkrun

So, what do you do once you have successfully summitted the highest mountain in the world?

You run your 100th parkrun at Bushy parkrun.

Johannesburg’s Mandy Ramsden starting climbing in 2006 and 4 years later she became the second woman from Africa to summit Mount Everest. After her successful adventure on Everest she went on to climb all 7 of the highest mountains on the seven continents; These seven summits are Aconcagua, Denali, Kilimanjaro, Elbrus, Mount Vinson and the Carstensz Pyramid.

Mandy has continued to lead an adventurous life by abseiling down Angel Falls in Venezuela, diving the Blue hole in Belize and tuk-tukking around India. She has also run over 35 marathons and ultramarathons including two Comrades marathons and she has earned her permanent number at the 56km Two Oceans marathon.

In 2016 her daughter, Caitlin, persuaded her to run her first parkrun at Johannesburg’s Delta parkrun. Caitlin wanted her Mum to accompany her because she was frightened that she would embarrass herself by finishing last.
“We weren’t last” Mandy reports “Though, we were near the back.” 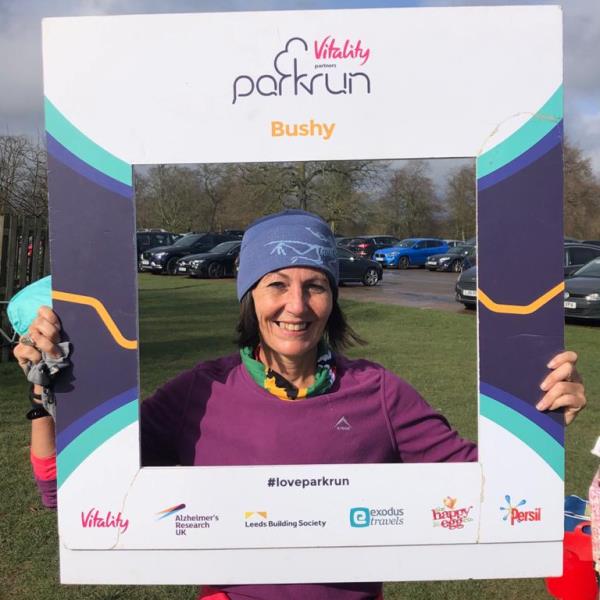 But after that Mandy was hooked on parkrun and she has continued to be a regular and keen parkrunner. As she approached her 100th milestone Mandy realised that she could time her 100th run to tie in with a trip she had planned to London. She deliberately missed a run or two in South Africa and volunteered instead so that she could finally achieve her 100th milestone at Bushy Park where it all began in 2004.