Swakopmund parkrun became the first parkrun in Namibia when it launched on 8th April 2017. Since then, over 2,400 different parkrunners have completed the course. They share their story with us:

How did Swakopmund parkrun come about? Buttons Heyns and Dave Hammond (still the Event Directors)  were responsible for getting us started. They were both very involved with organising sporting events at The Dome (Indoor Sport Centre) and hit on the idea of being the first club to introduce the wonderful and simple concept that is parkrun, to Namibia.

What have been the highlights of your event so far? The highlight surely must be our maiden run with Bruce Fordyce joining in. Also that we had not cancelled one event until COVID hit us. Swakopmund parkrun was nominated and won the Community Project of the Year by The Dome Sport Awards in 2018. 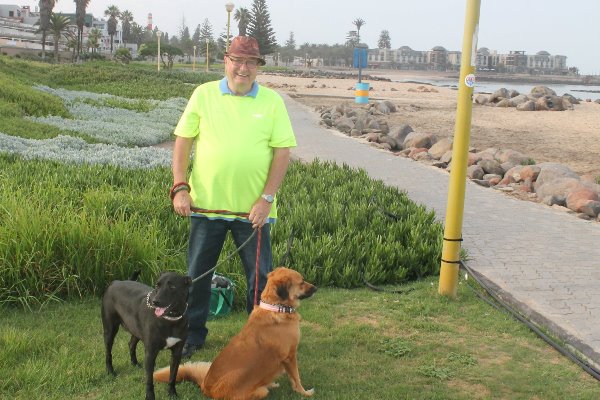 Who helps to make Swakopmund parkrun a success? Oh my goodness – Swakopmund parkrunners are totally lost if Alan Beck and his two dogs are not at the last turn. He has done his 103rd volunteer stint with his wife Barbara joining the runners. Apart from that we have a valuable team of supporting volunteers that are always available and that you can rely on at short notice. We have certain clans taking charge of the weekends. You get the family clans and the local sport clubs where they then make up the majority of the volunteer group for that day.

What makes Swakopmund parkrun unique? For a year we were the only parkrun in Namibia and with the towns being so far apart here we rarely had visitors from other towns except Walvis Bay our closest neighbour. Holiday time is a different story altogether. Lots of visitors from inland and South Africa but I think what makes it more unique is that we hardly have a Saturday without a foreign tourist or two joining in. The UK, Germany, Australia, The Netherlands. We also have our fair share of parkrun tourists and parkrunners using Swakopmund as the “S” in their parkrun alphabet challenge.

But the best of all – Swakopmund has been voted as the 6th most scenic parkrun route. How is that for being special?

Most mornings, especially in winter you will run the entire route in a thick fog. Swakop is famous for lying in a coastal mist belt but we take that in our stride and won’t let a little mist get in our way. 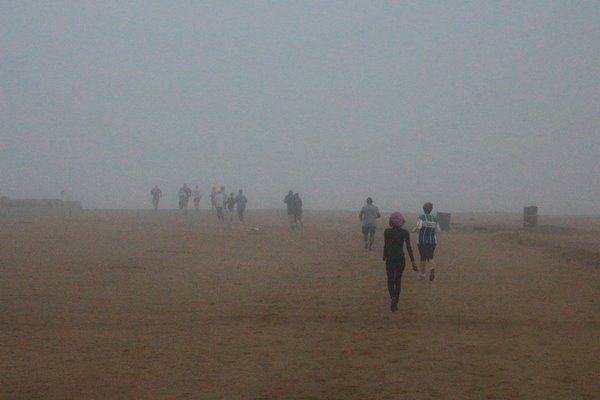 What is the course like? No hills in Swakopmund. Being Swakopmund the route is flat and fast. From the starting point you go downhill (meaning dropping 10 meters) gently towards the ocean (about a 200 m) from where you go onto a paved sidewalk for about 2km. After that you turn to the beach and come back the 2 km on a beautiful walkway all along the ocean. You turn at Alan’s point and onto the sidewalk again back home. Remember the last 200m “climb” and you are back home under the palm trees.

What are the typical parkrunners who come like? That is a difficult one. We have quite a large group of fast and serious finishers. Then there is the group of young children from the Mondesa Youth Opportunities (MYO), which provides education subsidy to select Grade 4-8 students from Mondesa who show promise. It is absolutely wonderful to see the young ones enjoying themselves every Saturday. They sometimes get a lift with their organiser, Mrs Sue Wagne, but mostly they get up early and walk or jog the +- 2km to get there in time for the start. Then we have the families with the prams, bicycles and dogs making up the back. The Swakopmund Striders (local athletics club) form a strong part of our runners and also volunteers.

We cater for all ages, with the youngest starting at 4yrs and oldest in their 80′s.

What have been the success stories of your parkrunners? What I can say is that our local athletics club Swakop Striders have seen an increase in their numbers of newcomers that want to try their “feet” at longer distances. They then take over the training of athletes to prepare them for longer runs. We have a lot of marathons and fun runs in Swakopmund and some people who had started as parkrunners are now doing 21km and even full marathons. The club also has a strong contingent that do the Comrades every year. 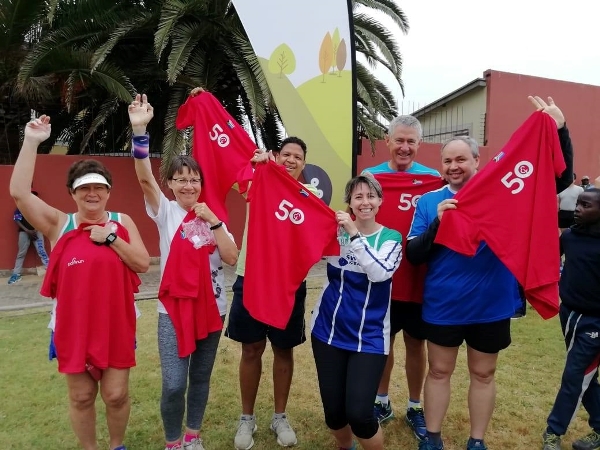 What are the facilities like? The start/finish is on a beautiful grassy patch under some palm trees. We have more than enough parking space all around. No more than a quick 100m jog for the latecomers who had to park at the furthest point. Swakopmund is a small town so we also have a fair amount of runners that walk, run or cycle to the parkrun area. We are across the road from The Dome – a state of the art indoor sport centre. Some runners meet there at Zest Coffee Shop for a well-deserved coffee or breakfast after their run.

What is the one thing a first timer to Swakopmund parkrun should know? You are going to be one of the family here. We are a relatively small parkrun community. We average about 120 runners every weekend so if you are a visitor there is no hiding from us. The road to fitness starts with the first step.

When Saturday mornings become the highlight of your week

As I took to the road yesterday, another glorious meeting up with fellow parkrunners, suitably masked and keeping our obligatory distance, I could not help but think how important these moments of meeting on a Saturday morning have become for me. Now in our 5th month of lockdown and for many who live on their…