Although my home parkrun is in South Africa, my (not)parkruns have been in Lima, Peru where I have been stuck for the past six months.

The government here enforced a very strict lock-down for four months with the army on the streets and long curfew periods, but this was actually comforting under the circumstances particularly as we all ignorant of the impacts that would result at that time.

The climate is perfect here with temperatures ranging between 14 and 20 even though we are in the middle of winter.

I’m actually fortunate that I am at sea level as I was initially working on a mine in the Andes at an altitude of 4,300m and believe me that is a real challenge to even walk!

If I can get back up the mountain before I leave I would like to attempt a parkwalk, which I’m sure must be one of the highest routes on record! My usual ones around Johannesburg are considered to be at altitude but that would be taking it to another level (pun intended). I’m looking forward to being able to leave the country and get back to some form of normality, but this currently looks like it will maybe only be in the New Year.

Blessings to our parkrunning comrades 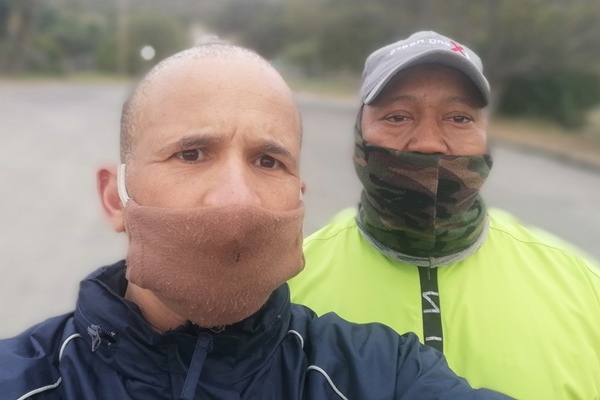 When lockdown started in South Africa, me and my Firefighter friend, Jacobus Oncke wer very frustrated to stay fit, because we could not go out for a run, due to one of the rules of only being able to run between 6 and 9 in the morning. The time frame was out of our training schedule, because it was winter and still dark in the morning.

We are also essential workers and could not be far from home during for any emergency that may be arise. We decided we going to run around our houses for 5km. We challenged each other to sponsor an amount for each kilometer, to buy a parcel for a not fortunate person. Between us we collected R200 and bought a grocery voucher and handed it over to one of my neighbors in our fishing village.

This picture is of us both after a 5km not(parkrun).